Dr. Adzik was cautiously optimistic as he explained the surgery to us this evening and outlined what's to come. Jordan's surgery was very difficult. Everything was up in his chest: spleen, stomach, liver and intestines. There was practically no diaphragm on his left side. In the picture below, you can see the size of the surgical incision. It was significantly larger than what they are used to seeing because the liver was kinked in such a way that made it very difficult to move. 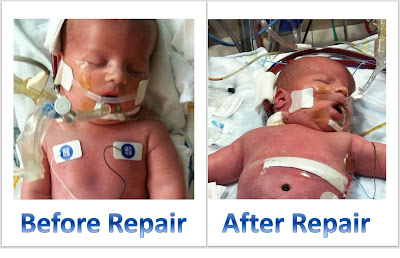 Jordan's abdomen was much smaller than a typical baby's. The organs that are supposed to be in the abdomen were in the chest; therefore, the abdomen didn't have anything to grow around. His abdomen is very full now. Dr. Adzik was able to fit all of the organs back into Jordan. As experienced by another family we know, sometimes they have to leave organs outside the body because they can't fit.

Jordan's next few hours will be extremely important. Organ tissue doesn't like to be touched. They can become inflamed or bleed. Jordan has accumulated fluids throughout his body. It is important that he pees off these fluids to relieve pressure on his lungs and stomach. This is a dangerous balance to keep because Jordan is dehydrated. They will continue to give him a saline solution to hydrate him, but not too much because of the fluids in his tissue.  We can't describe how full Jordan's abdomen is.  Over time, the organs should settle in and the abdomen will stretch out.

Another major concern is the ECMO circuit.  The longer Jordan is on ECMO, the greater the risks that go along with it.  The circuit is starting to consume resources, meaning that it is clotting.  This is normal but becomes a major concern at this time.  The science of how they are trying to manage Jordan's bleeding and, at the same time, thin the blood so that the circuit doesn't bleed is amazing.  Basically, if the circuit clots in a way that affects how well it can support Jordan, they would have to change the entire ECMO machine out.  It would be like taking 10 steps backward: Jordan's body would have another inflammation cycle, the lungs would close, etc.  The window for opportunity to get Jordan off the ECMO circuit looks to be tomorrow (Saturday) or Sunday.

Jordan has a very small left lung.  Now that the pressure of the other organs on that lung is gone, it has the ability to fully open and operate.  Our lungs can grow until we are 8 or 9 years old.
While visiting with Dr. Adzik, it was amazing to think that this man had just rearranged the insides of our boy so that he can have a chance at surviving.  As we look at our son, it is still hard to take it all in.  We want to cry because it looks so painful, so overwhelming.  We want to rejoice, because this was such a major step in his progress.  He has handled everything so well and that gives us so much hope and strength. They told us that an adult body couldn't handle what this baby boy is going through right now.
Posted by Michael Brandi and Caleb at Friday, November 04, 2011

Thank you for the help!

We wanted say "thank you" to everyone who helped our family during this difficult time. The donations that were made helped us survive what could have been a very difficult financial situation. A special thank you to Michael's mom, Tammi, for the sacrifice of picking up and moving to an unfamiliar city. To Grandma and Grandpa Legleiter, for their tremendous support and love. To our host family, Page and Jim, for their hospitality and friendship. To Naho and Eric, for their compassion and the special gift of a "hug." The list could go on and on because of the tremendous support we received. We are forever indebted to true charity. This wouldn't have been possible without all of you.

Michael Brandi and Caleb
Hoping and praying for our son's healing and inheritance here on Earth as it is in Heaven.